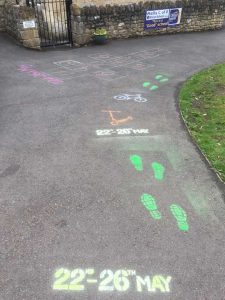 Curious “Banksy” style chalk “stencil-art” images of scooters, bicycles and footprints began appearing in town and outside some local schools over the last few weeks. However, the mystery was solved when Frome’s Missing Links introduced their School Travel Challenge in eight Frome schools between Monday 22nd and Friday 26th May.

During the Challenge Week, local schools enjoyed some friendly rivalry to see who would be awarded the Frome’s Missing Links Trophy. The winner was to be the school with the biggest percentage increase in children walking, scooting or cycling to school. Beckington School has come out top with a “giant leap” up from 38% to 73% average travelling actively during the Challenge Week, that’s an increase of 35%.

The highlight of the week was probably the awesome “Coin Bicycle” which was made by Yr 6 Selwood pupils on their multi-sport pitch. The vastness of the bicycle meant it could only be truly appreciated from above. Luckily, Selwood staff Ms Howell and Mr Sharp had organised a drone to allow filming and photos. The scale of the design and the work involved in laying out all the bronze and sliver coins was amazing. The coins had all been collected in a “fill a bottle” competition between classes and were then generously donated to Frome’s Missing Links. 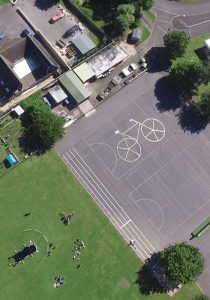 The total amount from all the donations from mufti, uniform days and charity events at participating schools was £1,431.77. Frome’s Missing Links were able to organise school events during the School Travel Challenge week due to their success in securing £500 by popular vote at Frome Town Council’s Participatory Budgeting event.